Its one month into the Playboy Collector's Series and 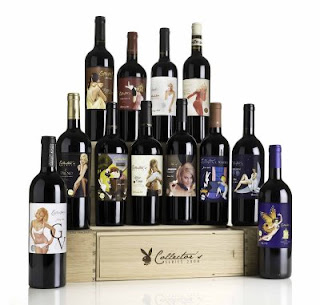 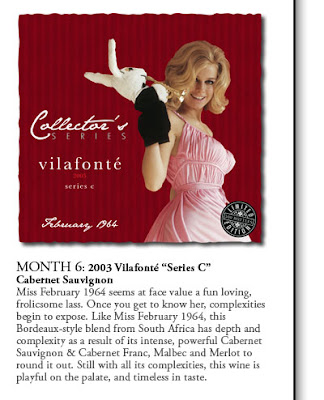 Posted by Unknown at 8:47 PM No comments:

12.5.08
Mike Fisher, a founding partner of US investment banking firm Global Wine Partners, believes South Africa, with its excellent wine-growing conditions, the beauty of its winelands and competitive cost structures, is well-placed to advance from its relative obscurity in the US to the point where it becomes better recognised for its quality offerings.

Fisher was in South Africa in November to attend the AGM of the Great Wine Capitals Global Network, and he was impressed by evidence of South Africa's ability to make high-quality wines. The local wine industry's sustainability initiatives also impressed him - he reckons they are ahead of most of those in California. However, in his view, South Africa was the least known of the major wine-producing regions amongst US consumers. “Go into any grocery store in the US and of the 300 wines on the shelves, you will be lucky to find more than one or two of South African origin.”He feels the success of boutique enterprises such as Vilafonté, in which well-known Californian winemaker Zelma Long and her viticulturist husband, Phil Freese, were involved at the Cape, or the Napa Valley's Hess Collection's investment in Glen Carlou, and similar projects, would help to advance the country's visibility as a quality producer amongst those with a keen interest in wine.Meanwhile, Constellation's Kumala and E&J Gallo's Sebeka labels would help to build awareness in more mainstream markets, he said.A harder sellWhile “not overwhelmed” by most Pinotage he tasted, although there were some notable exceptions, Fisher, who initially trained as a winemaker, found South Africa's expression of the Bordeaux varietals to be very good. Local Sauvignon blancs and Chenin blancs also impressed him. “South Africa's reputation as a producer of Sauvignon blanc is gaining ground. The same could happen with Chenin blanc but because it is still very much a secondary variety in the US, it will be a harder sell.”Fisher is also a specialist in mergers and acquisitions, valuations, corporate finance and wine business advisory services, and his company has offices in California, Sydney and Paris. He says that while it would be possible for US investors to buy land locally and produce quality wines very cost competitively, there would still be the hurdle of having to sell South Africa first and then penetrate a heavily traded US market. “The difficulty of gaining traction in the US market is not unique to South Africa. If US investors were to produce in Argentina or Chile they would still have to fight for their place on America's shelves,” he said.Another factor influencing the situation now is that given a general reluctance to invest during financially uncertain times, he predicts that there would be fewer investment transactions in the international wine industry over the next 12 to 18 months. “Moreover, the large companies have done their consolidating for now and it is not in the nature of the small specialist producers to amalgamate to achieve economies of scale,” he said.
Posted by Unknown at 8:25 AM No comments: