Dear team
We have experience the same thing very similar of which happen in the East Rand (SA) on Sunday evening.
Yesterday afternoon at about 3pm. While working with the tractor busy mulching in block A, while working in the direction of the store. Strong winds stand up behind the tractor and move side-ways past the tractor.
I kept an eye on it as it getting stronger and higher as it moves in the direction of the upper store (where we store the chemicals). 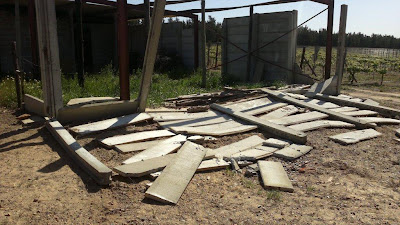 I suddenly realize but this wind looks different than some winds that I have ever seen. I also realize that Piet and Gerhardus are busy inside the bottom store busy cleaning the fingers of the water filters. It strike my mind that I should scream to tell them to get out of the store as danger is coming. This all happen so fast that by the time that I want to do what I decided to do to alert them, it was all over. This all happens in 4 seconds.
My assumption is that it seems that; it looks like the wind starts at the vineyards just at the trees of the fence between us and Rainbow chickens. It seems like it was busy building momentum and picking up speed.
The bottom store was too big and hollow and therefore it split the head from the tale and it did not continue to grow further after the store. 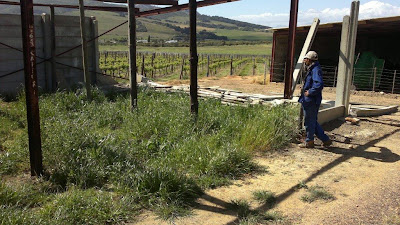 Piet and Gerhardus were fine as it could not do any harm to the bottom store. Piet and Gerhardus could not hear the sound which came from the fall of the top store hall as they have experience a different sound as the wind hit the bottom store.
It was scary
I alert the authorities via rescue services of what we have experience.
I hope you believe me
Edward
Posted by Unknown at 12:46 PM No comments: 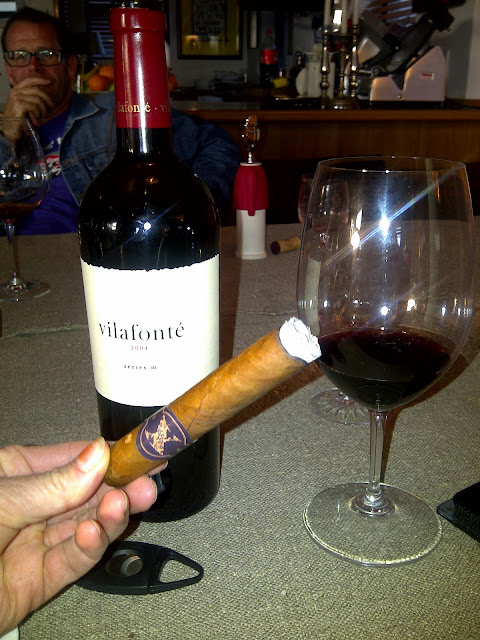 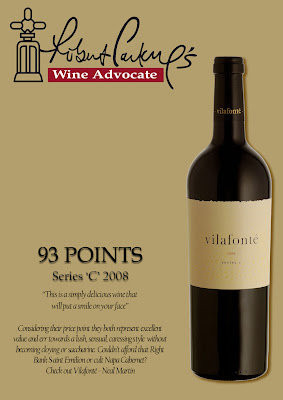 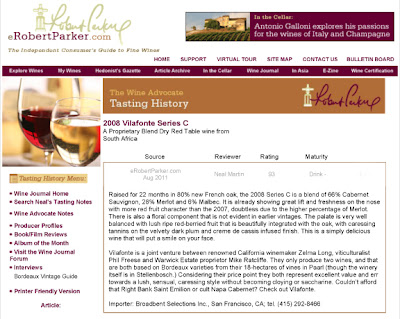 CLICK ON THE IMAGE TO ENLARGE
Posted by Unknown at 12:17 PM No comments: 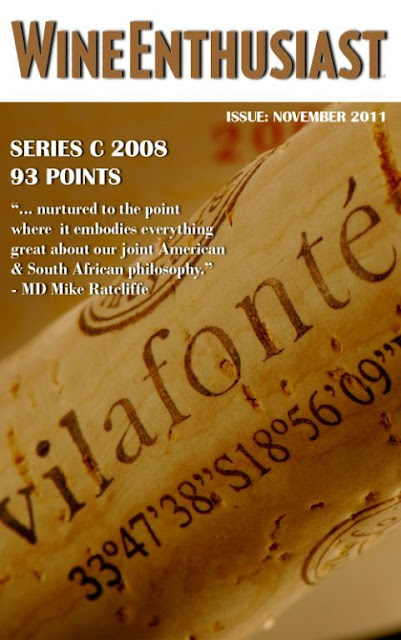 Posted by Unknown at 5:13 PM No comments:

A fun event this weekend 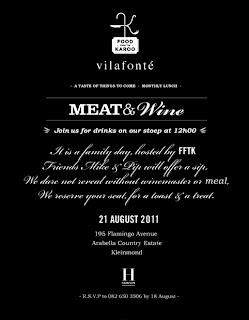 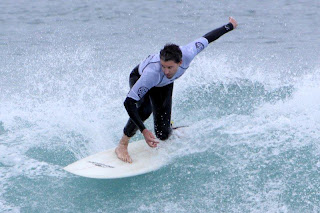 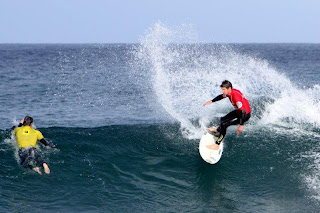 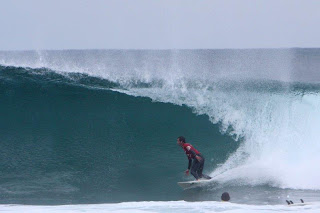 Smith tried to impress the crowd with a set wave from the outside reef, and was racing the section across the reef with great aplomb until he got hammered by the curling inside bowl, much to the delight of onlookers.
"It was another wonderful event, with fantastic catering, cool drinks and kegs of beer to keep everyone nourished, followed by a festive prize giving dinner and much spontaneous mirth at the Stables Restaurant in Stilbaai afterwards, said Mossop.
Mossop noted with pleasure that winemakers really came to the party this year in terms of bringing 'heaps' of their own wine to the function.
The traditional bottle of Big Red was dished out to contestants, "slightly more of an easy drinking wine this year that should be consumed quite soon". The Big Red is a 1.5 litre bottle of blended wine comprising contributions from the entering wine estates who donate the wine before the event.
Posted by Unknown at 5:47 PM 1 comment:

I love it - a refreshing new take on wine bottle photography!

The New York Wine Experience is a joyous three-day celebration of great wine. Only at a Wine Experience can you sit down and taste the world’s best wines guided by the estates’ owners and winemakers. You’ll enjoy outstanding vintages, rare wines from the producers’ cellars and top-scoring wines from around the world.
Our focus this year is on stars of the wine world. To highlight this we have planned a weekend program that will engage all of your senses while adding to your wine knowledge. Our goal is always to offer a program that will be educational for both novice and expert. Daytime seminars filled with unique wines from around the world, food and wine pairings from star chefs, a black-tie gala and more promise to make this event a favorite.
Posted by Unknown at 1:10 PM No comments:

Vilafonte excels in Wine Spectator - again. Click on the image to enlarge 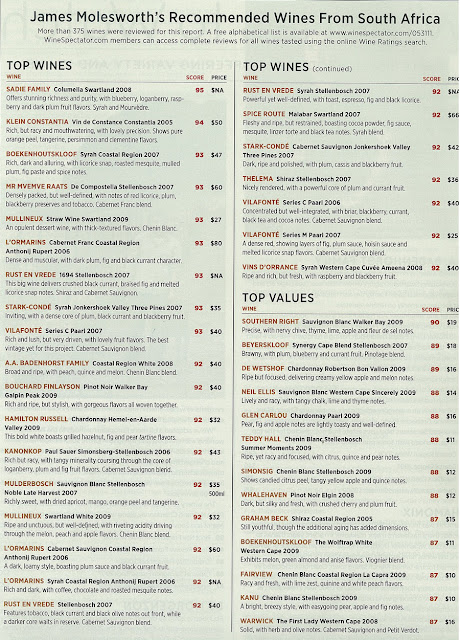 Posted by Unknown at 9:23 AM No comments:

Vilafonté Series M 2006 is being released in LCBO Vintages on April 2nd:

Vilafonté Series M 2006, Wo Paarl is being released in Vintages on April 2nd: Blend, South Africa, $39.95 (7757)
Reviewed by John Szabo, Canada's first and currently only Master Sommelier, earning the title from the Court of Master Sommeliers in London, England in 2004.

A new seal for South African wines, a world first

Posted by Unknown at 3:17 PM No comments:

Vilafonté cleans up again in the USA with Stephen Tanzer 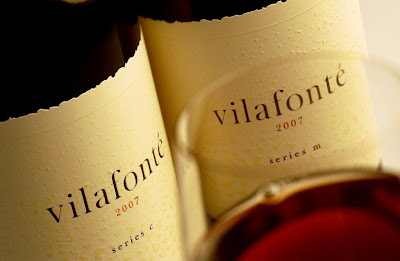 believe it or not! This is really how we make wine at Vilafonte

Posted by Unknown at 1:35 PM No comments: 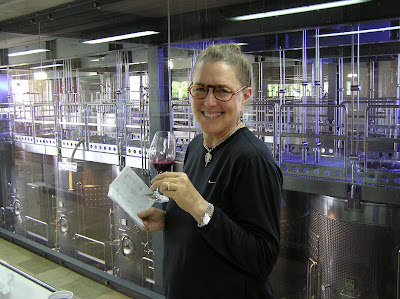 The key characteristic of the Vilafonté 2011 harvest was that it was early, short and fast. Due to our location, we have an early bud break and bloom normally, and so we harvest in February and early March, usually over a month period of time.  In 2011 we started a week earlier than normal and finished before the end of February, the earliest finish ever, and the shortest; our harvest was 19 days long.
Harvest of our 17 blocks of wine grapes – Cabernet, Cabernet Franc, Merlot and Malbec – proceeded in an orderly and very consistent manner; once harvest of one variety started; the others ripened in sequence and we harvested day after day. There was a short pause between the end of Malbec and the beginning of the Cabernets, and once we started harvesting them on Feb. 17, we brought in grapes daily until the end of harvest.  Valentine’s Day was graced with the double harvest of our Cabernet Franc and the last of our Malbec.
The weather was cooperative and its particular characteristics for our site and our harvest period were:  consistent, warm temperatures - lack of the cycling from cool to warm that we normally see. Night temperatures were consistent with a 5 year average, and in February warm temperatures over 30C. were 40% higher than the 5 year average.  We had (1) slightly more breezes or wind than normal; (2) no rain; (3) no severe heat spells.  However the 2 day heat spell in early January, around veraison, caused some crop loss in Malbec and Cabernet Sauvignon.
Grape characteristics were quite positive with regards to evenness of ripening; we measure quantitatively the variation in ripeness within each block…we call this “berry variability” and a scientist would call it “standard deviation”. This year our ripeness on a grape to grape basis was within a very narrow band; predicting excellent concentration in the wines.  Indeed, in the winery their colour is deep; and tannins, though significant in the grapes, were properly modulated in the extraction fermentation process.
Overall, the baby Vilafonté wines exhibit the usual characters of their respective locations in the vineyard, and in general have lovely concentration, deep black/red colours, and their distinctive black and red fruit flavours.  In March they are either finishing fermentation or starting malo-lactic fermentation, having been drained from the fermenters directly into their own specific barrels for aging.  Like two year old children, this is not the “prettiest” time for the wines, but in a few months they will begin to blossom and the 2011 vintage will most clearly reveal its nature and character.
Zelma Long,
Winemaking Partner
Posted by Unknown at 3:19 PM No comments:

Zelma Long #2 on the list of 'The worlds leading women of wine'.