Judging at year eight of the highly regarded and eagerly awaited Tri Nations Wine Challenge was concluded recently. Huon Hooke announced the 13 Class Trophies to a capacity crowd of 200 at the Four Seasons Hotel in Sydney on Friday 17 September. Winemakers from across the Southern Hemisphere came to receive their trophies and a name in the books for this increasingly interesting wine event.
The Vilafonte winemaking team under the leadership of Zelma Long was delighted that the soon-to-be-released Vilafonte 'Series M' 2007 was awarded the sought-after GOLD medal. Vilafonte has had a star-studded year with another nomination for 5 Stars in the John Platter guide as well as Zelma Long being nominated for the prestigous 'WINEMAKER OF THE YEAR" by influential USA magazine WINE ENTHUSIAST.
The “By invitation only” Challenge judged a total of 360 wines across 13 classes from the three nations and 135 were awarded either trophies, Double Gold or Gold medals. All trophy and gold medal wines will go on a trade mission to Hong Kong in October where there will be a major trade and media tasting at the Jockey Club in Happy Valley, demonstrating to Asia the strengths of the Challenge wines.
Results are published at http://www.trinationswine.com
Posted by Unknown at 1:00 PM No comments:

Vilafonte is going on tour to Durban and Johannesburg. We will be hosting a couple of 'rocking' wine dinners. A few tickets remaining. Join me? 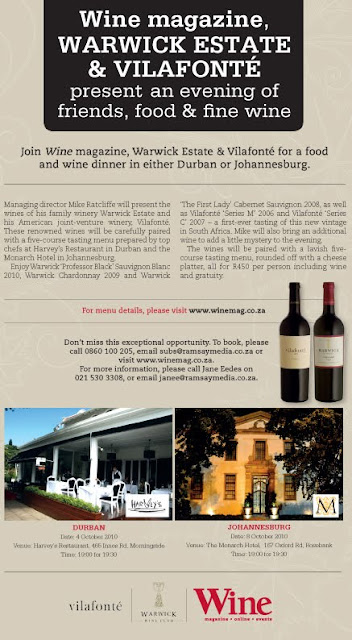 Posted by Unknown at 8:57 PM No comments:


Vilafonte from Christopher Riccobono on Vimeo.
Posted by Unknown at 2:46 PM No comments:


Mike Ratcliffe, of Warwick Wine Estate has partnered with Napa winemaker Zelma Long (of Robert Mondavi, Simi and Long Vineyards fame) and Dr. Phil Freese (a viticulturist from Napa Valley who has been a consultant to Warwick and many wineries in California and South Africa) to make this boutique winery making bold and beautiful reds.

The winery is in a small building- like Niphad Wine Park in Nashik, adjacent to a couple of other wineries opposite a residential complex. The small winery makes only red wines in two labels- M series and C series-using Cabernet Sauvignon, Merlot, Cabernet Franc, Malbec are the only grape varietals used but the yields are kept so low at 1-2 tons/ hA that the wines are really concentrated, full of fruit, a great balance and are priced accordingly. 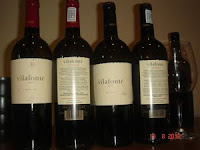 The winery uses its own grapes from Paarl. It’s new and in only second year in production at this facility. You will find the wines full of ripe tannins and mature phenolics. There are two labels only: Series M (for modern) and Series C (Classic). Both use Cabernets Sauvignon and Merlot as the base blends – Malbec and Cabernet Franc are added in varied percentage depending on the series and vintage.

If you want to know the price, you are not in the league of its buyers who were supposed to be the Americans when it started operations but the rich Chinese and the Brits are drinking it too, besides more of South Africans coming into their fold gradually. One day, some smart Indian hotel chain will perhaps import this luxury brand- duty free, for their high end clients who like California style big wines.

Incidentally, the winemaker partner Zelma Long has been nominated for the Best Winemaker Award for this year by Wine Enthusiast, a respected and one of the top two wine magazines in the US. 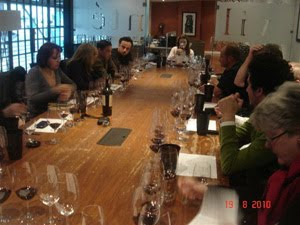 The beauty of new springtime growth in the Cabernet vineyards 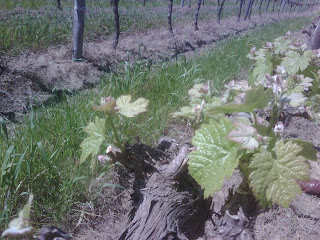 On the release of our 2007 Vilafonte Series C, Phil Freese provides a detailed harvest report. 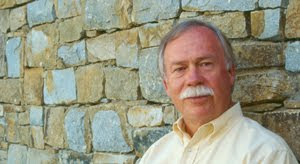 Due to our location of the Vilafonté vineyard in the Southern Hemisphere, our growing season begins in the calendar year ahead of our harvest date. For the 2007 vintage we are watching the winter temperatures of May through August 2006 for the ability to accumulate sufficient “chill units” which assures that the vines are fully into dormancy and the cold units provide the stimulus for good budding in the spring. The Cape is truly a ‘Mediterranean’ type of climate and the cold winter months of late 2006 gave us a good accumulation of cold units.
Both winter and spring rainfall amount was slightly above ‘normal.’ Perhaps more importantly, the timing of the rains was good with small amounts of rain in mid-September and early October before our flowering in late-October. While these rains can cause anxiety for the vineyard team since the rainfall and associated cool temperatures and long periods of high humidity provide ideal conditions for mildew - there were no problems since the spacing of the rains was nearly ideal.
The Vilafonté vineyard is a low to moderate vegetative growth area so we did not have issues of overly dense canopies from the small amounts of rain. (In fact we do not even own or use a hedging machine.) Standard canopy management practice has us retain just one shoot per spur location on our uniquely designed cordon trained vines. Thus the canopy begins the season nicely spaced with good air and sunlight penetration and low disease pressure. These canopies are much like a cane-pruned vine but with the benefit of the extra stored carbohydrate supply of the cordon’s permanent wood structure. In cool springs we have good storage reserves for flowering and moderate vegetative growth with the uniformity of shoot growth afforded by cordon-trained vines.
These attributes were important in the flowering of October. Our Malbec and Merlot vines are always first to bloom and they were at 50% flowering in the mild temperatures of the 3rd week of October. There were then 3 days of windy and cool weather where much of the Cabernet was in flowering. Our experience is building to give us confidence in our site that Cabernet Sauvignon, being the hearty Bordeaux varietal, seems to be less sensitive to cool weather at flowering than some of the other red Bordeaux varieties. 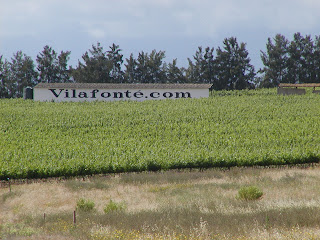 Cabernet Franc in the cool weather of late October 2006 tended to give us more variability in flowering timing and thus led to more variability in veraison-time coloring of the fruit. Also the crop level was somewhat lower due to poor ‘set’ or fertilization of the flowers and their development into berries – again related to the cool temperatures and some overcast skies.
In January 2007 we introduced a practice that we thought was revolutionary - the full-scale practice of veraison thinning on a “per berry” basis. Instead of going through the vineyard and throwing off entire clusters that are late in coloring – we instead used our observations of the flowering variability in October and wanted to remove only the individual green berries.
Fortunately we had a small team of highly trained women who were accustomed to working in table grape vineyards. When we ask them to carefully hold and turn each cluster of fruit and remove only the green and pink berries within the clusters, they simply said ‘fine – we can do that.’ While we thought this would be a challenging concept and practice – they did it with ease as it is a common practice in some table grape varieties.
The growing season was moderate with its normal 3 to 5 days cycles of a build of daily high temperatures then a cooling of several days and then the gradual building again. The exception to the normal seasonal pattern came near the end of January with 5 days of high daily temperatures near 400 C and warm nights. Most of our varieties were finishing veraison stage and not affected by the burst of heat.
There is the theory that a burst of heat will accelerate the ripening process. Such heat events can in fact accelerate the apparent sugar concentration due to loss of water from the stressed vines but we do not look at this as true ripening. We applied some drip irrigation and waited patiently for our customarily early Merlot and Malbec to recover their flavor profiles and ‘composure’ after the heat.
Harvest began on the 31st of January with “Z” block Merlot – a “core” wine that can contribute strongly to both Series C and M wine blends. This was followed with the Malbec blocks of “V” and “W” on February 2nd.
The second week of February had a forecast of more rain and we brought in additional merlot just before 3 days of rain (20 mm).
Mid-February provided regular daily rhythm of warming and cooling cycles and an even ripening of the balance of the Merlot and Cabernet Franc.

March began with 3 days of rain and cool temperatures which gave us over 35 mm (more than 1.4 inches) of rain fall. We often call these late-season rains on Cabernet as ‘cleansing’ of the fruit referring to washing off any bit of dust. In fact the rains are valuable for the last bit of natural moisture needed for the final ripening but the cooler temperatures associated with a typical storm system also send key signals to the vines that it is getting on to what we call ‘game over’ stage for the growing season and the push to finish tannin ripening of seeds and skins and softening of the last bit of under-ripe characters.
We finished the vintage with the balance of our Cabernet Sauvignon blocks at the end of the first week of March.
Posted by Unknown at 5:01 PM No comments: 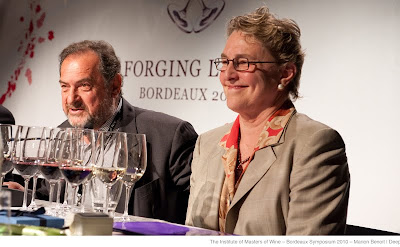 The Vilafonté winemaking team is proud to announce that co-founder and winemaking partner Zelma Long has been nominated by Wine Enthusiast magazine for their prestigious WINE STAR ‘Winemaker of the Year’ award.
Zelma Long is a renowned Californian winemaker and one of the most awarded female winemakers of all time. Zelma Long and her husband winegrower Dr. Phil Freese are the Californian joint venture partners in Vilafonté www.vilafonte.com together with well known South African winery owner Mike Ratcliffe. Vilafonté is the first and only South African and American winemaking joint venture and is the only South African winery to have been twice nominated for ‘Winery of the Year’ in the same awards. This accolade continues to spotlight the Vilafonté achievements in positioning South African wines at the top end of the quality spectrum.
Zelma is a former winner of the James Beard Wine & Spirits Professional of the Year and has been inducted into the James Beard Hall of Fame. Some additional recent accolades in 2009/10 include:
 Selected by the University of California, Davis, Alumni Association for an Outstanding Achievement award - one of only 6 awarded in 2009.
 American Society of Enology & Viticulture Annual Merit Award – the only award in 2009.
 California State Fair Vintner Life Time Achievement Award for 2009
 American Wine Society 2009 Annual Merit Award Winner
 Induction into the CIA (Culinary Institute of America) Vintner Hall of Fame - March 2010
 The John Platter wine guide five star award

Wine Enthusiast Magazine’s 11th annual Wine Star Awards recognize excellence on all levels of the industry. Profiles of Zelma Long and nominees from other categories will appear in the November issue of the magazine while the winners of each category will be announced and presented in-depth in the December 15 issue. All award recipients will be honored at the annual Wine Star Awards gala dinner on Monday, January 24, 2011 at the New York Public Library in New York City. Wine Enthusiast Magazine’s Wine Star Awards Dinner began honoring achievements for the year 2000.
http://www.winemag.com/Wine-Enthusiast-Magazine/Web-2010/Wine-Star-Awards-NOW-2010/
Posted by Unknown at 9:57 AM No comments: