9 July 2005
The Vilafonté team has just embarked on a tour of the US to launch their wines - proclaimed to be 'South Africa's first luxury wine brand'. They intend keeping WineNews informed of their whereabouts, experiences and impressions whilst on tour. 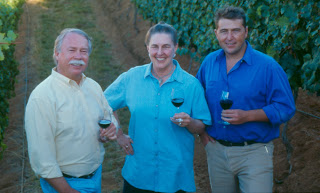 Vilafonté, for those not yet in the know, is a joint venture between Warwick's Mike Ratcliffe, veteran Californian winemaker Zelma Long, her viticulturist husband Phil Freese and US wine merchant Bartholomew Broadbent, of which the vineyards are located near Paarl.Mike Ratcliffe writes from Chicago...After months of careful planning we have all managed to arrive in Chicago in one piece - Zelma and Phil from California and Mike from Stellenbosch.The wines are here and have rested after their journey, our launch functions have been arranged and the venues are booked. The weather is so beautiful here at the height of summer that we have decided to host our press and trade launch in the middle of Lake Michigan on a luxurious ex-Presidential Ship called 'El Presidente'. It is 32 degrees and being out on the water with the Chicago skyline as a backdrop is a phenomenal setting - the air-conditioning is an added bonus!The much anticipated moment has arrived and we are relieved to get a positive 'thumbs-up' from the assembled, press and trade. You have to go to great lengths to attract attention on a Sunday in summer in this beautiful and wealthy city. Zelma made bookings at MK, the celebrated Michael Kornich restaurant in Chicago and we were treated to a gastronomic extravaganza accompanied by a couple of bottles of Vilafonté. Early to bed tonight as tomorrow is going to be a big day as we fly to the nation's capital, DC.http://www.vilafonte.com/
Posted by Unknown at 1:52 AM