Harvest is wrapping up in South Africa


While winemakers inevitably have a multitude of different opinions on the outcome of a harvest, there are some threads that come through that when woven together correctly, can start creating a clear picture. The Vilafonte Vineyards winemaking team wrapped up harvest this week while the Warwick Wine Estate team have another couple of days to go. In general, harvest 2012 in South Africa can, in my opinion, be considered a huge success. But why? What are the defining characteristics?


The one overwhelming common theme is that an unseasonal heat-wave descended on the Winelands in early January - a critical period for phenological ripeness. With the benefit of advanced weather forecasting being relatively common these days, the heat wave was identified about a week in advance and any and all reasonable responses to the impending temperatures were taken by those that were paying attention. Unfortunately there are very few tools to deal with excessive heat and the most powerful tool is irrigation. For those that have either decided not to invest in irrigation or who have a philosophical preference to dry-grown viticulture - 2012 will probably at least get them thinking that the judicious application of supplemental irrigation is more of a necessity than a nice-to-have. Dry-grown vineyards in the Cape lost significant tonnage and the remaining grapes would have suffered from heat stress symptoms like high pH and dropping acidity. Berry shrivel would also be an unforeseen symptom that can lead to elevated alcohol. All of these outcomes are not good. 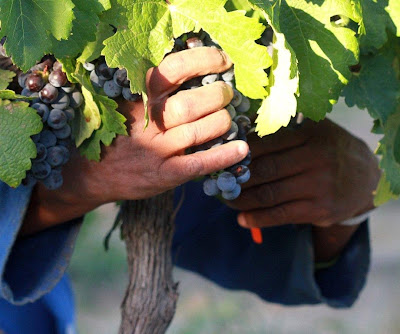 On the other hand, this heat-wave was the only speed-bump in 2012 and for those that were able  to manage it - there was no measurable negative outcome. Since mid January, the Cape has been characterized by refreshing lower than average temperatures which have provided what could best be described as an idyllic environment for the steady accumulation of sugar and the pursuit of phenological ripeness. Interestingly, in many of our vineyards we observed advanced ripeness at lower sugars which again provides an indication that 2012 could be considered a benchmark year. On observation of the grapes at harvest, we noticed a slightly larger berry size, but excellent levels of all the goodies that lead to colour extraction, flavor compounds as well as nicely ripened tannins which create mouth-feel and texture in the wines. Without trying to 'talk it up' too much, possibly the biggest indicator of quality comes from the significantly reduced rate of berry variability which leads to concentration in the wines and is one of our most important indicators of quality - this is not a subjective measure and at the risk of being technical, we had the lowest berry variability measurement of standard deviation in my career. This basically means that at harvest, a huge proportion of berries were perfectly ripe - simultaneously.

Despite the above, I remain a cynic and I like to see out beautiful wine through fermentation before a truly great vintage can be pronounced but the signs are there at Warwick and at Vilafonte.