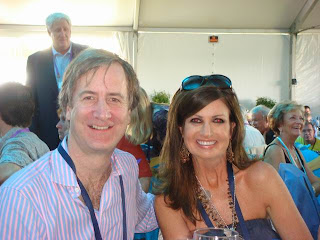 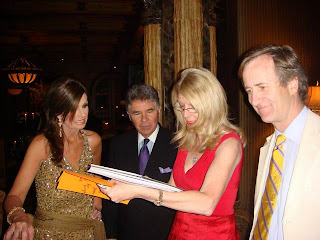 The name of our Vilafonté and Staglin Vintner Dinner last night was "Xceeding Xpectations"…and we sure did. Our South Africa Auction lot, which includes wines from the Staglins, Vilafonté and Warwick; visits to the Cape winelands, a luxury stay at the One and Only. Safari trip to Singita, to various CapeTown locations; and other excitement, sold for…………………$340,000!! This was the highest wine lot in the auction. The 3 others at the same level or higher were all "trips" (Mediterranean cruise; Caribbean Cruise; U.S. golf tour) for multiple people.
Wow. These Napleites know how to raise money for worthy charities. Some other tidbits I learned today:
- they actually fund programs for up to 20 different groups; and a group of trustees
is responsible to review all proposals; and then track the work of each of the
awarded programs to be sure the money is being effectively spent.
- bidding paddles are sold to 500 bidders maximum; there is often a waiting list
- cost to attend the auction events and bid if $7500/couple
- if you want the best seats at the auction and specific people at your table, the
cost is $20,000.
They spare no opportunity to feature the children who benefit from the proceeds. As they say,,,bid early, bid often; and they did . A neat trick was to hang a small plastic packet on the paddles, one for $1000; one for $5000; and one for $10,000. . If you wanted to donate, you select the appropriate ticket and during one auction lot, volunteers come around with buckets to collect your "ticket" which has your paddle number on it They collected over $600,000 worth of donations in about 5 minutes, with this technique.
What was the total auction take, for charity for children??... $8 million plus. For 61 lots. Pretty amazing.