I’d always thought that Vilafonté would make an 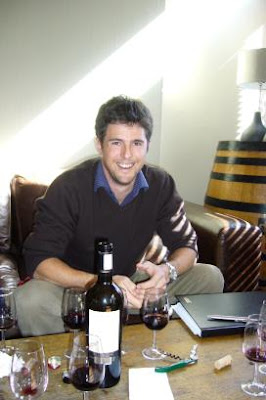 excellent brand name for an añejo tequila with a minature of Mexican revolutionary Pancho Villa on the label, like a Cuban cigar band. But Mike Ratcliffe got in first and Vilafonté is a brand name for two serious red blends from Paarl as well as a handmade Cuban cigar from the same company.

Vilafonté winemaker Bernard le Roux
We drove past Vilafonté, the farm in Simondium, on the way to Nederburg cellarmaster Razvan Macici’s top secret Canon Route vineyard earlier this month, access to which is strictly controlled to deter lookie-loos and other unfashionables.
In a strange coincidence, I was sitting next to Kathy de Wet at a Great Gatsby dinner on Excelsior farm on Saturday night. Kathy was born on Babylonstoren farm and her late brother David Louw developed the secret Canon Route vineyard. Back at Vilafonté, the two reds are called M and C, which I’d always thought referred to the dominant cultivar Merlot and Cabernet Sauvignon respectively.
Which works for the 2005 vintage but in 2006 the M is a mixture of 43% Cabernet Sauvignon, 39% Merlot, 15% Malbec and 3% Cabernet Franc and very nice it is, too. Far fresher with more supple tannins than M 2005 (52% Merlot, 31% Cabernet Franc and 17% Malbec). This confusion of recipes and changing horses between vintages is a common problem for wannabe icons. Just ask Giulio Bertrand whose Morgenster red blend changes recipe more often than the excellent Chris Kelly changes winery.
M 2006 can’t segue into C 2006 as that wine is already released (Cabernet Sauvignon 54% 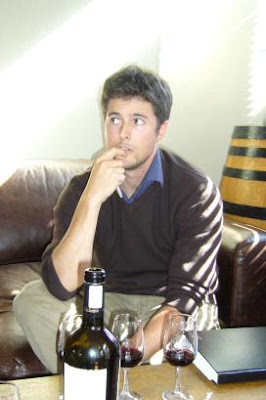 , Merlot 40% and Cabernet Franc 6%). Not that it would necessarily want to, as the C 2006 opened up with disturbing notes of coffee and mocha which thankfully soon blew off after the vigorous agitation of a Mexican revolutionary. I got to taste the illustrious trio after bumping into Vilafontéwinemaker Bernard le Roux slumming it at Chenin, the made-over Nose Wine Bar in the Cape Quarter.
So what does the M stand for? 007’s crotchety old bag boss in the James Bond franchise played by Dame Judi Dench? Probably not, as Bernard says ladies prefer C: “they have more demanding palates than men.” And deeper pockets too, as the C costs R110 more than the M at R375 a bottle.
Could it be that savvy Mr. Ratcliffe is paying court to the two most powerful wine opinion formers in SA, Michael Fridjhon (M) and Christian Eedes (C)? Or is that one conspiracy theory too many? If a name change is being mooted in the smoky cigar bar at Warwick, perhaps Z would work, in honour of founder Zelma Long and the rapier-like mark of Zorro that fits in with a Mexican theme.
But that won’t fly as Emile den Dulk got there first with his De Toren Z, even if he does pronounce it “zee.” So it’ll have to be N or P then, after Norma (Ratcliffe) or Phil (Freese), naturally, with any resemblance to my own initials, purely coincidental!
Read it on Neil P's blog http://blogs.thetimes.co.za/pendock/2009/08/13/vilafonte-changes-horses/
Posted by Unknown at 9:05 AM